Proton transfer from multiply-protonated protein ions to gaseous molecules was studied in the gas phase. Absolute reaction rate constants for proton transfer were determined from intensities of parent and product ions in the mass spectra. Temperature dependence of reaction rate constants and branching fractions for proton transfer was measured. An issue that is attracting considerable attention is vacuo conformations might resemble structural evolution that originated from temperature in the gas phase. 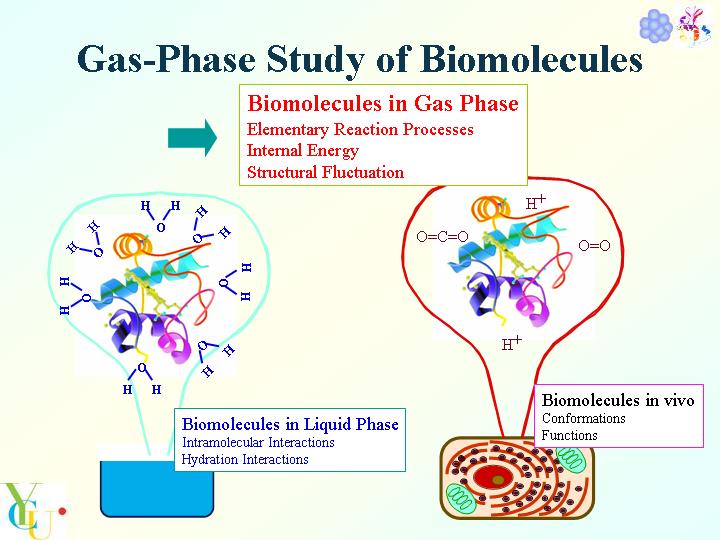 A home-made tandem mass spectrometer with electrospray ionization (ESI) was used for measurements. Multiply-charged protein ions were produced by ESI of a dilute solution of proteins in methanol-water mixture including acetic acid. We chose disulfide-intact lysozyme, disulfide-reduced lysozyme, cytochrome c, myoglobin, ubiquitin, as sample proteins. The ions produced by ESI were admitted into the vacuum chamber through stainless capillary. The charge-selected protein ions emerging from a quadrupole mass spectrometer (QMASS) were admitted into a collision cell with octapole ion trap. The collision cell was filled with He including gaseous molecules. We chose 1-propylamine, 1-butylamine, 1-pentylamine, tert-butylamine, diethylamine, dipropylamine, pyridine, 2-methylpyridine, or 2,6-dimethylpyridine as target molecules. Temperature dependence of reaction rates and branching fractions for proton transfer from multiply-charged protein ions to the target molecules was measured, by changing temperature of the collision cell. The parent and product ions were mass-analyzed by a time-of-flight mass spectrometer equipped with reflectron. 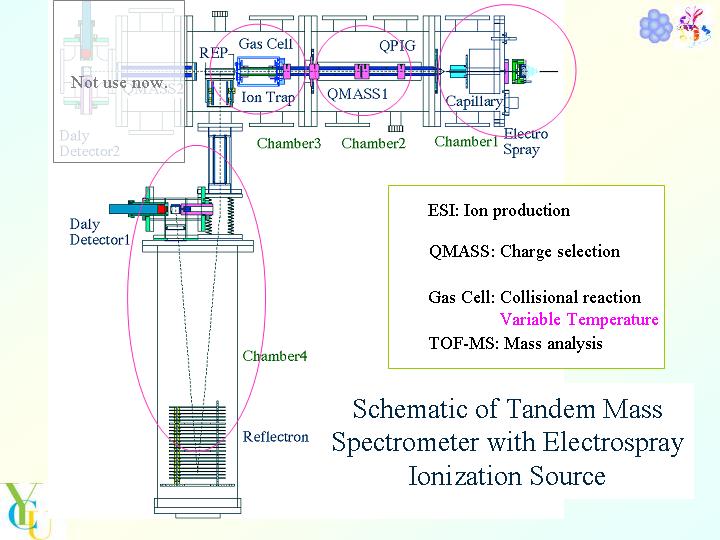 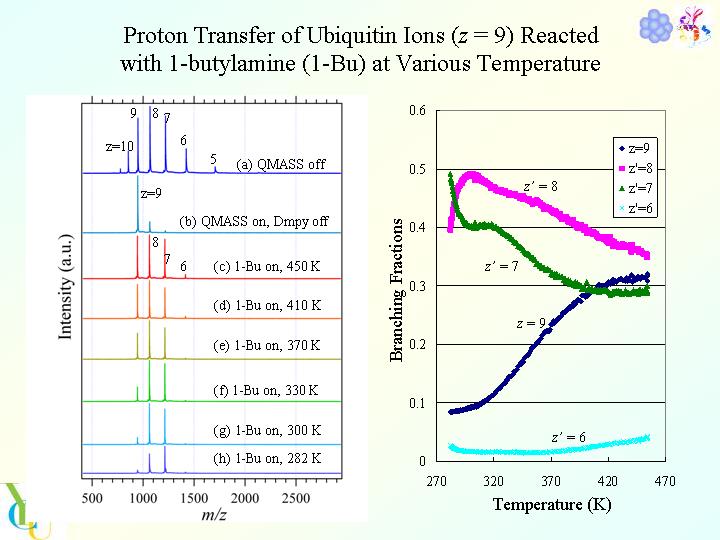 Typical time-of-flight mass spectra of multiply-charged ubiquitin ions are presented in the figure as a function of mass-to-charge ratio (m/z). In the figure (a), mass spectra of ubiquitin ions, [M + zH]z+ (z = 5 ? 11), are presented. By putting off DC voltage in QMASS, all ions, which were produced with ESI, transmit through QMASS. In Fig. 1(b), an ion of specific charge states, [M + 9H]9+, was selected as a reactant with QMASS. In Fig. 1(c) -(h), mass spectra of [M + 9H]9+ reacted with 1-butylamine (1-Bu) at various temperature, were presented. Temperature of gas cell was (c) 450, (d) 410, (e) 370, (f) 330, (g) 300, and (h) 282 K, respectively. As seeing the figures, a lot of product ions, [M + zÅfH]zÅf+ (zÅf = 6, 7, and 8), were observed. Not shown in these figures, a protonated molecular ion, 1-BuH+, and a protonated dimer ion, (1-Bu)2H+, were also detected. Following these experimental observations, it was confirmed that proton transfer from [M + 9H]9+ to 1-Bu proceeds in the collision cell.
As described above, dramatic changes of intensities were observed for parent and product ions. The changes of intensities relate with remarkable changes of reaction rate constants. Absolute reaction rate constants for proton transfer were estimated. Based on these experimental observations, we discuss conformation change of protein ions with change of temperature, which originates in self-solvation to protons by hydrophilic residues in polypeptide chains, and delocalization of charges with self-solvation. 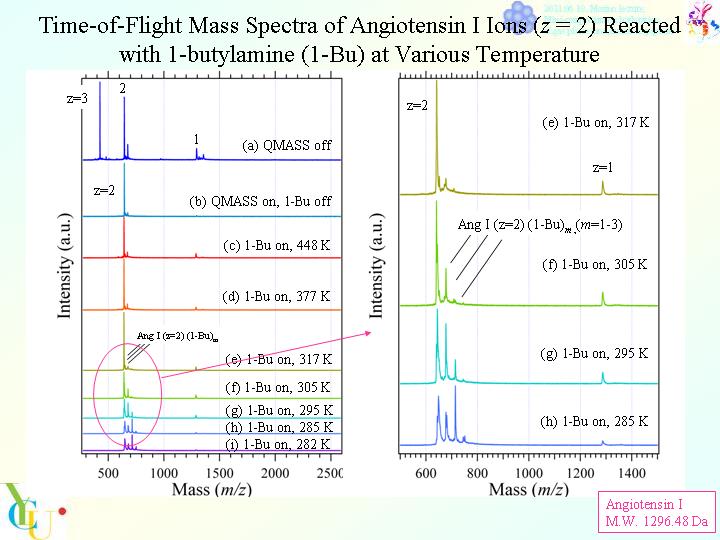 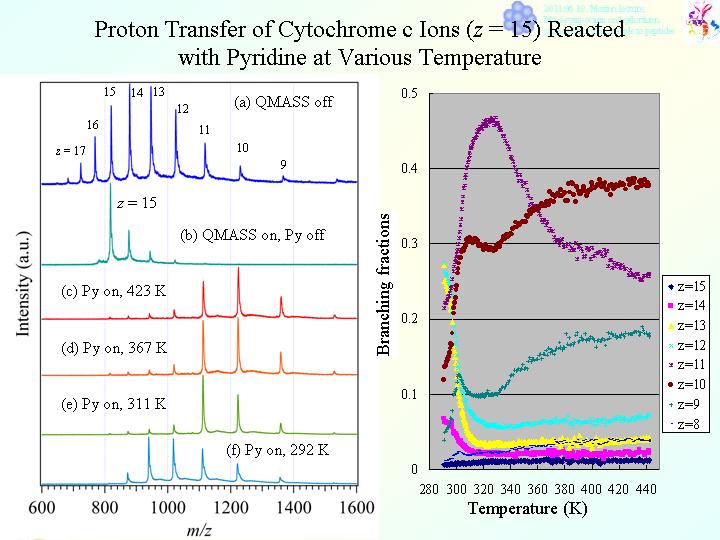